Discover the history and beauty of this southern pearl 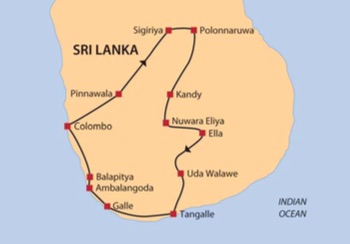 Sri Lanka has had a magnetic appeal for many centuries and its gems, pearls, ivory, and spices have always attracted the attention of seafaring traders. Marco Polo visited the island twice, first in 1284 and again in 1293. Less than 50 years later his Moslem alter ego, Ibn Battuta, arrived in a place he called 'Battalah' where he was entertained as a guest of the Tamil king. The Portuguese landed in 1505 and gradually extended their control over the coast, forcing the indigenous inhabitants to move their capital from the Colombo region to the safety of Kandy, deep in the southern hills. By the middle of the 17th century, the Dutch were in the ascendancy and at the outset of the 19th century the British East India Company took full possession of the island, under a treaty known as the Kandyan Convention, signed in 1815.

But Sri Lanka's history stretches way back beyond the days of Marco Polo and Ibn Battuta. By the 4th century BC, Anuradhapura had been established as a royal city. In the 5th century AD, an amazing citadel was built at Sigiriya; and towards the end of the 11th century, Polonnaruwa became the capital, a position it held for over a century.

Your tour begins in the Sri Lankan capital of Colombo and then you drive north to Sigiriya, stopping enroute to explore the amazing cave temples at Dambulla. From your hotel you visit the ancient ruins at Polonnaruwa, and the next morning climb the spectacular rock citadel at Sigiriya. You then head south, taking a scenic byroad through the Knuckles Range, to the old Sinhalese capital at Kandy. A day here allows you time to explore before continuing up into the highlands at Nuwara Eliya, the heart of the tea growing industry. To the southeast is Ella, the nicest of the hill towns, where you walk up to 'Little Adam's Peak', and spend a morning learning the secrets of Sri Lankan cuisine. Driving south you will see the tallest Buddha statue in the world before reaching Ude Walawe National Park, Sri Lanka's premier elephant reserve. You will enjoy an afternoon jeep safari and then drive to the celebrated south coast for a night at a beach hideaway. Your final highlight is Galle, a perennial favourite, where you have a full day and a half to explore. On your way back to Colombo you will visit the mask museum at Ambalangoda and take a boatride on the Madu River. Your journey ends in Colombo.

People who ordered Secrets Of Sri Lanka also ordered the free travel brochures below. Click on the images to find out more about these brochures.