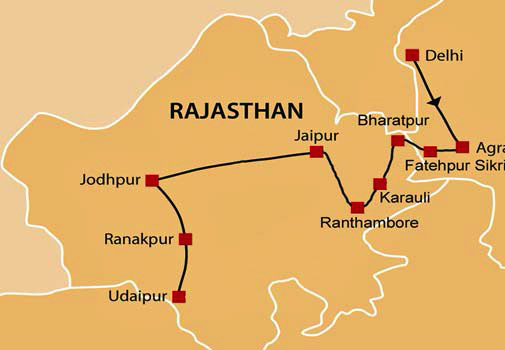 India is one of the most colourful countries in the world, with Rajasthan at its epicentre. Despite being an essentially arid region, it shimmers with almost every shade in the rainbow. Dusty towns and villages are embellished with dazzling saris and vibrant local markets offer fruit, vegetables and a bright palette of spices. In addition, the state is dotted with numerous stately palaces – some more colourful than others – along with elegant havelis (merchant homes), temples and much more.

This tour features some of India’s most stunning destinations, including the Taj Mahal, Udaipur, Jodhpur and Jaipur. In addition, explore off the beaten track to less known highlights such as the ancient towns of Karauli and Narlai. And, for lovers of wildlife, discover Ranthambore, one of North India’s largest national parks, with a growing Tiger population along with other animal and bird species.

People who ordered Colours of Rajasthan, India also ordered the free travel brochures below. Click on the images to find out more about these brochures.